Dear Friends of the Center for the Study of War and Society,
This season marks the centenary of the 1916 Easter Rising in Dublin, Ireland. On April 25 (Monday) at 4-5pm in the seminar space outside the Center for the Study of War and Society at Hoskins Library at UTK, Prof. Martin Griffin (Department of English) will present “Easter 1916–Poetry, Rebellion, and Conformity in Irish Memory”. He will discuss the ways in which the 1916 Easter Rising (as opposed to other elements of the national independence struggle) has been framed and memorialized in Ireland over the 20th century and until today. Of special note are aspects of the fiftieth anniversary in April 1966, and the complexities of history and memory as they interact with pragmatic politics.
Dr. Martin Griffin is an associate professor in the Department of English at the University of Tennessee-Knoxville. His work is in the field of American literature and culture, with a focus on the relationship of the literary arts to political ideas and action, both historical and contemporary. He has published two books, Narrative, Identity, and the Map of Cultural Policy: Once Upon a Time in a Globalized World (2013) and Ashes o the Mind: War and Memory In Northern Literature, 1865-1900 (2009). 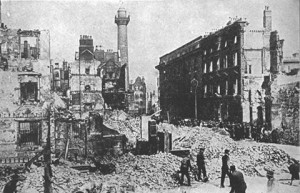