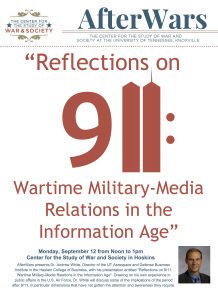 Dear Friends of the Center for the Study of War and Society,

We start our eighth year of AfterWars events with a very timely presentation by Dr. Andrew White, Director of the UT Aerospace and Defense Business Institute in the Haslam College of Business, entitled “Reflections on 9/11: Wartime Military-Media Relations in the Information Age”. Drawing on his own experience in public affairs in the U.S. Air Force, Dr. White will discuss some of the implications of the period after 9/11, in particular dimensions that have not gotten the attention and awareness they require.

This session will take place Monday, September 12, from noon to 1pm, in the seminar space outside the Center for the Study of War and Society in Hoskins, second floor in the back (past the Presidential Papers projects).

Andy White, Ed.D. is the Director of the Aerospace & Defense Business Institute (ADBI) in the University of Tennessee’s, Haslam College of Business, bringing 30 years of experience in education leadership, teaching, strategic communications and national security to the position. He also chairs the college’s Aerospace & Defense Advisory Board, coordinating the support and counsel of more than 20 executives from all across the industry. He also develops and supports career orientation and placement efforts with aerospace and defense (A&D) employers and serves as a faculty member in the college. From 2007 to 2014, Dr. White directed UT’s Aerospace & Defense MBA (ADMBA) program, serving as the senior academic and student affairs officer and a core faculty member for the executive MBA designed exclusively for A&D professionals. He earned the Haslam College Dean’s Award for Excellence in Executive Education for 2012 and again for 2013. He also serves on the Advisory Council for UT’s Corporate and Foundation Relations Office.

Before returning to his alma mater (UT), Dr. White served a 20-year career as an Air Force officer, spending most of his service leading public affairs (government and public relations) missions, retiring as a lieutenant colonel in 2007. During his Air Force career, he deployed in support of contingency and combat operations six times, including a deployment to Iraq with Special Operations Forces in 2004. He also deployed to Saudi Arabia in 2001 and 2003, serving as Director of Public Affairs Strategy and Plans for in-theater air operations at the start of combat in Afghanistan and Iraq.