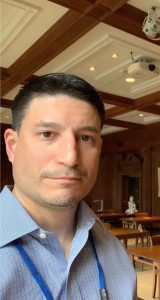 Chris Magra is a Professor of Early American history at the University of Tennessee.  His prize-winning research has focused on the American Revolutionary War.  His first book The Fisherman’s Cause examines the military mobilization of commercial fishermen in the Revolution.  Poseidon’s Curse explains why British naval impressment is listed in the Declaration of Independence as one of the justifications for forming the United States of America.  Dr. Magra has written articles for several academic journals, including the International Review of Social History and the New England Quarterly.  He has been a research fellow at the David Library of the American Revolution, the Massachusetts Historical Society, the Peabody Essex Museum, and the University of Tennessee’s Humanities Center.  He has presented research papers at academic forums in Canada, the Netherlands, and throughout the United States, including the American Historical Association’s annual meeting and the Omohundro Institute of Early American History’s annual conference.

Matthew Kelley is a PhD student specializing in Modern European History.  His studies focus on civil society on the European home front and the role of neutral countries during World War I. His dissertation, “German Agitation in Swiss Civil Society during the First World War,” examines German activities within Swiss civic associations in their attempt to sway them for the benefit of German war aims. His research investigates how this agitation used these civic associations as transnational networks and centered their rhetoric on debates over national identity and definitions of international principles.