Captain Rosemary Mariner, United States Navy, retired, passed away January 24, 2019, in the fifth year of her battle with ovarian cancer, with her husband and wingman of 40 years by her side. She was 65. Born in Harlingen, Texas, raised in San Diego, she graduated from Purdue University with a degree in aeronautics at 19. Captain Mariner was one of the first eight women selected to fly military aircraft in 1973. After flight training in 1974, she became the Navy’s first female jet pilot flying the A-4C and the A-7E Corsair II. She moved to the Naval Weapons Center in China Lake, then Air Test and Evaluation Squadron 5. For sea duty, in 1982 she reported aboard USS Lexington, where she qualified as a Surface Warfare Officer. 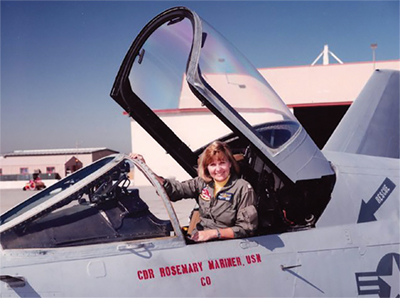 In 1990 Captain Mariner became the first woman to command a military aviation squadron, VAQ-34, based at Pt. Mugu, California.

In 1990, she became the first woman to command a military aviation squadron, VAQ-34, based at the Pacific Missile Test Center at Pt. Mugu, California. She attended the National War College in Washington, DC, earning a Master’s in National Security Strategy, and served on the staff of the Joint Chiefs in the Pentagon. Her final military assignment was as the Chairman of the Joint Chief’s Chair in Military Strategy at the National War College, before retiring in 1997. Throughout her career, Captain Mariner was both willing to serve as a mentor to others and deeply grateful to the men and women who enabled her to pursue her dreams. She was instrumental in the repeal of restrictions on women serving in combat.

In retirement, Captain Mariner was a resident scholar at the Center for the Study of War and Society in the UT Department of History where she taught classes in military history, emphasizing the intersections of war and conscience. She continued to serve as an advisor on national defense policy and women’s integration into the military for ABC News, PBS, and the Department of the Navy. A voracious reader and an eager academic, she devoted herself to a love of knowledge. In recent years, this included the disease that took her life, which she sought to understand as fully as possible. As expected, she tenaciously fought an implacable foe to the end. She lived in Norris, Tennessee, with her husband, retired Navy Commander Tommy Mariner, and their daughter, Emmalee, who attends Duke University.

“Fundamentally, after the loss of Capt. Rosemary Mariner, life at CSWS will never be the same. For two decades she was our Resident Scholar and also a lecturer in our Department of History and United States military for many of those years. Her own research and teaching focused on the evolving U.S. military tradition, placing it in the context of ancient Greco-Roman ideas and English political philosophy and tradition. She focused in particular on connections between republican citizenship and military service, citizen armies, conscription, just war theory, and the nexus between homeland security and civil-military relations. Many students recall fondly her encouragement as a mentor, her high standards, and her energy.  She coedited, with G. Kurt Piehler, the volume The Atomic Bomb and American Society: New Perspectives (University of Tennessee Press, 2009). Rosemary was a scholar and teacher of history, and also witnessed and made history herself. I recollect so vividly her presence at the center. Rosemary always had a ready smile. At other times, her great and wry sense of humor was on display, like the time she had us all in stitches with stories of unofficial Pentagon jargon, like the phrase which described someone lackluster being reassigned (rather than demoted) as a “lateral arabesque”! In her teaching, the many students who took her military history courses were both encouraged and held to high standards. Our series of graduate assistants benefited in a different way–each one was mentored through Rosemary’s keen observations and insightful conversation in the course of schooldays. Our loss is strongly felt, and our condolences go to her family and all her friends. We were so lucky to have her at the Center.”

“Captain Rosemary B. Mariner, US Navy, retired, was a legendary trailblazer. She was great friend, mentor, and officemate for 18 years. For most of those years I absolutely could not bring myself to call her Rosemary. It was always “Hey Cap’n Mariner” and she never corrected me. I think it was a happy reminder of our former military lives. Our little bond. Only in the last several years as we grew closer did I occasionally call her by her first name. What a blessing to know such a temporal and spiritual warrior. She was a true leader by example in every role she took on, but especially in her walk with Christ. I will miss our talks, laughter, her calming presence, and encouragement. She and my dad shared similar qualities of mind and spirit, and were the most humble people I have ever known. I admire them both more than I can express. Things won’t be the same without them. Until we meet again in His presence, I will strive to live her wise words to me. “I surrender my controlling nature to Christ praying that I can be his tool for some better good”. Ceiling and visibility unlimited!”