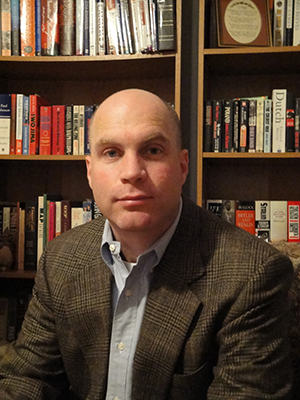 John C. McManus (’96) received the seventh annual Gilder Lehrman Prize for Military History for his book Fire and Fortitude: The US Army in the Pacific War, 1941-1943. The Gilder Lehrman Institute of American History bestows the $50,000 prize annually in recognition of the best book in the field of military history published in English during the previous calendar year.

“This year the Gilder Lehrman Institute Military History Prize judges were unanimous in awarding the $50,000 prize to John McManus’s splendid Fire and Fortitude: The US Army in the Pacific War, 1941-43,” said Professor Andrew Roberts, chair of the judging committee. “We were hugely impressed with all the six books on our shortlist, but McManus’s work stood out, and it more than satisfied each of our four key criteria, which are that it must be historically ground-breaking, excellently researched, extremely well written, and accessible to the general reader.”

John C. McManus is Curators’ Distinguished Professor of US military history at the Missouri University of Science and Technology (Missouri S&T). He is in frequent demand as a speaker and expert commentator, appearing on CNN.com, Fox News, C-Span, the Military Channel, the Discovery Channel, the National Geographic Channel, Netflix, the Smithsonian Network, the History Channel, and PBS, among others. He also served as historical advisor for the bestselling book and documentary Salinger, the latter of which appeared nationwide in theaters and on PBS’s American Masters series.

“I am deeply honored and humbled to receive this year’s Gilder Lehrman Prize for Military History,” said McManus. “As a professional military historian, I have long revered this award for its leading role in the recognition of cutting edge work in the field. I want to express my sincere thanks to the jurors, the Gilder Lehrman Institute, and the New-York Historical Society. In writing Fire and Fortitude, my intention was to broaden our historical perspective and enhance our understanding of the Pacific/Asia theater in World War II, and my hope is that this remarkable literary recognition will help further that objective.”

While working on his PhD at the University of Tennessee, McManus served as the assistant to the Center for the Study of War Society founder, Charles W. Johnson.

“Professionally speaking, the Center was the best thing that ever happened to me,” said McManus. “When Dr. Johnson hired me as his assistant, it opened up so many new worlds. He was the best teacher, and the most influential mentor I ever had. He taught me how to personalize history. He stoked my passion for modern US military history. I believe that the Center is his greatest legacy.”

McManus credits his experience at the Center as a crucial piece in his education in how professional historians conduct research.

“I came to Tennessee to study under Dr. Johnson and utilize, in my own research, the great collection of first-hand accounts he had compiled so lovingly. Delving into this exciting material brought my research to life, made my dissertation possible, and helped me refine it into a book,” said McManus. “I believe that my career as a professor, as an author, as a teaching scholar literally grew from experiences at the Center. Working there was a defining moment in my life, and I am so grateful to have had the opportunity. The Center is an absolute gem, and I continue to use the collection in so many research projects.”

Congratulations to John on his many accomplishments and well-earned recognition of his exemplary work, Fire and Fortitude. Read the official announcement online and watch John accept the prize and discuss his book.