One hundred years ago, Knoxville native and University of Tennessee, Knoxville, graduate Hugh Eckel was killed in northern France during an assault on German territory. When World War I ended, Eckel was awarded the Distinguished Service Cross and buried in the Knoxville National Cemetery. Visitors can see his grave in a prominent place facing the central driveway.

This is just one of many stories told November 3, 2018, when UT’s Center for the Study of War and Society, in conjunction with the East Tennessee History Center, held a day of events to mark the 100th anniversary of the end of World War I.

Free and open to the public, the activities began at the East Tennessee History Center, in downtown Knoxville.

The audience heard presentations from four faculty members from UT’s Department of History, on topics that ranged from the Civil War to World War I as they related to local history and commemoration: 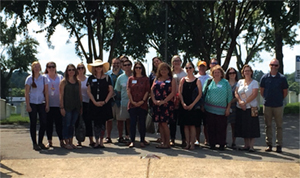 At the start of the program, the center premiered a short documentary detailing the Veteran Legacy Program in Knoxville. This program, which was created by the US Department of Veterans Affairs, seeks to produce educational outreach programs about national cemeteries with the help of local universities and schools.

The VA awarded UT’s center nearly $77,000 for initiatives to memorialize veterans. Students at the university have worked, as part of the Veterans Legacy Program, to compile previously incomplete veterans’ biographies and develop learning materials about Knoxville veterans and cemeteries.