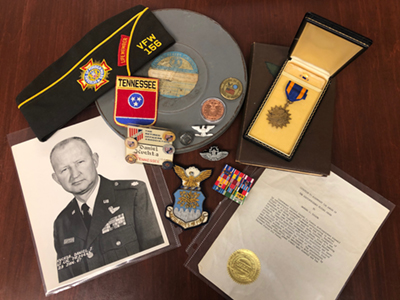 Colonel Daniel J. Kuchta’s donated collection of memoir, medals, photographs, and even a film reel from his illustrious service in World War II, Korea, and Vietnam.

Steve and Kathy Zuck donated the most recent collection we received. Kathy donated her father, Daniel J. Kuchta’s, memoir, medals, photographs, and even a film reel from his illustrious service in World War II, Korea, and Vietnam.

Kutcha’s parents immigrated from Czechoslovakia and he was a proud first-generation American. He enlisted in 1942 in the US Army Air Corps, where he flew C-47s and C-46s in the China-Burma-India Theater and was later stationed in Tokyo and Yokohama, Japan. His last two major military assignments were as head of Brown University Air Force ROTC (1969-70) and UT-Knoxville ROTC (1970-74).

Colonel Kuchta retired from the US Air Force after having served for more than 31 years. He later worked for the University of Tennessee, Knoxville for about 10 years as the director of non-credit programs and received his EdD from UT.