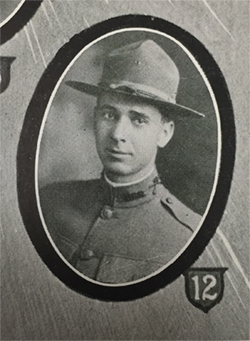 Second Lieutenant William Hugh Eckel was born in 1896. The Eckel family had been pioneer settlers in East Tennessee, originally from Germany. Before World War I, Eckel had been a member of Knoxville’s Boy Scout Troop 4, doing 14-mile hikes in the area. He was enrolled at University of Tennessee, Knoxville, where the 1917 university record shows him in the UT Battalion. He was then sent to train at Fort Oglethorpe, Georgia, and was commissioned as second lieutenant.

He was sent overseas with the 117th Infantry in May 1918. In October 1918, as part of the attack on the German Hindenburg Line defenses by the 30th Division, near Ponchaux in northern France, Eckel undertook courageous assaults on German machine-gun nests. His decoration citation speaks of hand-to-hand struggles with enemies and extraordinary bravery under fire, for the cause of saving his comrades. At the moment of the fiercest fighting, he was struck by a shell and suffered wounds that led him to die two days later, October 9, 1918, in the hospital.

He was posthumously awarded the Distinguished Service Cross. Eckel was originally buried in a British Military Cemetery at Tincourt-Boucly in the Somme, but was reinterred in the Knoxville National Cemetery April 1, 1921.