Since the Center for the Study of War and Society opened in 1984, we have amassed various collections and grown as a base for research and public service. The UT Special Collections Library and CSWS are making UT-Knoxville a nationally prominent center for military records on America’s battles, victories, crises, and other major events. We are collecting letters, interviews, diaries, photos, memoirs, and small unit histories so they can be preserved and made available to the public. A typical day at CSWS consists of a variety of activities from conducting interviews to receiving donations of personal service-related items from veterans or their families. Numerous undergraduate student interns have passed through our doors in the past 36 years. While at the center, all of these students participate in conducting and transcribing interviews, as well as other activities. Recently, our students had the opportunity to interview one of the last surviving World War II veterans in East Tennessee, Henry Cooper of Sevier County, and Vietnam War veteran Capt. William Beaty. They also conducted research for the new UT Armed Forces Memorial, which CSWS staff continued for a memorial that will be placed on the campus pedestrian walkway. The Armed Forces Memorial will feature all UT staff and alumni who gave their lives while in military service from World War I to the present. Our next newsletter will feature an update on this tremendously important project.

Our work also extends beyond our university. As part of the center’s vital public outreach, last year we partnered with the East Tennessee Historical Society to bring Francis Gary Powers Jr. to speak about the U-2 incident and his father’s controversial Cold War legacy. The 75th anniversary of D-Day special by WBIR Channel 10 News featured our program coordinator, Cynthia Tinker, who talked about the center, the significance of preserving the individual histories of America’s veterans, East Tennessee D-Day stories, and shared archival items like handwritten letters, official military telegraphs, and even a gold-plated Bible carried into battle. 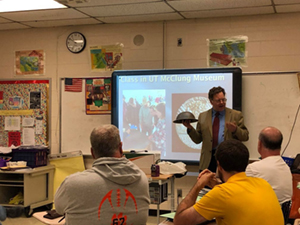 Vejas Liulevicius shared World War II items available at the UT McClung Museum as a different teaching strategy that teachers can use in their classrooms.

We also brought our expertise to Karns High School for the Knox County Schools In-Service District Learning Day, where Ernie Freeberg, UT history department head, and Vejas Liulevicius, CSWS director, lectured on strategies for teaching on the World Wars under the theme of “Americans at War.” This spring, teachers also heard from Robert Bland on the Civil War and Victor Petrov on the Cold War. Our director introduced best-selling author Erik Larson when the Friends of the Knox County Public Library hosted him at the Bijou Theater to launch his latest book, The Splendid and the Vile: A Saga of Churchill, Family, and Defiance During the Blitz. 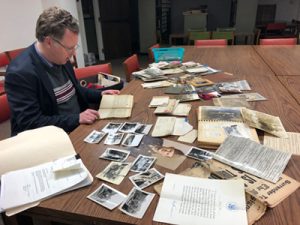 Finally, we aided WBIR Channel 10 News in tracking down the origins of a mysterious German journal brought back to East Tennessee by a World War II veteran. Our undergraduate interns and graduate assistant are working to scan, decipher, and translate the journal with aim of returning it to its rightful owner. While the typical day at the center can vary, we are always open to educational and public opportunities to raise awareness on the social, cultural, and political impact of war.