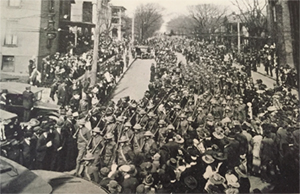 Original photo caption from newspaper clipping: “Knoxville’s Welcome Home” A Company of the 117th Infantry, with helmets and gas masks on and bayonets fixed, in the homecoming parade, April 5, 1919.

Jules Bernard, a happy warrior and self-described airplane nut, was born in Thibodaux, Louisiana, where his father worked at the Laurel Valley Plantation. He was mechanically gifted and built their first radio in the 1930s. He also built model airplanes and repaired cars. He enlisted in 1940 as an aircraft mechanic and saw service in North Africa, Corsica, Algeria, Italy, England, and worked primarily on bombers.

It was in England that a LIFE magazine correspondent painted a scene of Bernard on the tail of B-17, which was published in July 1943. He and a buddy acquired a camera in North Africa. When they parted ways, Bernard brought home the wide angle lens and built his career with that acquisition. After he graduated from LSU-Baton Rouge in 1949, Bernard opened a photography studio and photographed anything and everything, from babies and weddings to oil rigs. He and his wife traveled out west and camped in their car. They lived and worked in Yosemite National Park for a time, she as a camp cook and he as a telephone lineman.

In 1967, he took a job at the United States space program in Huntsville, Alabama, where his high-speed photography played a role in the development of the moon buggy. From 1971-1985, he served as head of public relations and continuing education at the University of Tennessee Space Institute in Tullahoma. Bernard has never lost his love of aircraft. In 1968, he obtained his pilot’s license and, after retirement, continued to build model aircraft and volunteered many hours at the Tennessee Museum of Aviation in Sevierville, Tennessee.