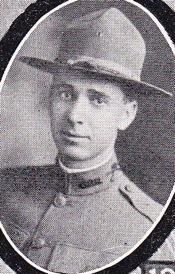 William Hugh Eckel (Nov. 5, 1896 - Oct. 9, 1918) was born in Knoxville, Tennessee. He was attended the University of Tennessee as part of the Class of 1918, but volunteered in the United States Army before graduating when the county entered World War I in 1917. He went to first officers’ training camp in May 1917, and received commission as second lieutenant. Later transferred to Company L, 117th Infantry, with whom he sailed to France May 11, 1918. Took part in all engagements of 30th Division up to October 7, 1918, when he was wounded in attempting to take a machine gun nest. Died in hospital two days later. He was awarded the Distinguished Service Cross posthumously for his extraordinary bravery under fire (see below).

The President of the United States of America, authorized by Act of Congress, July 9, 1918, takes pride in presenting the Distinguished Service Cross Posthumously to Second Lieutenant Infantry William H. Eckel, United States Army, for extraordinary heroism in action while serving with 117th Infantry Regiment, 30th Division, A.E.F., near Ponchaux, France, 7 October 1918. When heavy fire was encountered from enemy machine-gun nests located in a railroad cut, Lieutenant Eckel led his platoon in several successful attacks on these nests, personally killing and wounding a number of the enemy with his pistol and disarming one of them in a hand-to-hand struggle. He then reorganized the captured position and held out against the enemy with such men as he had left, opening fire himself with an automatic rifle, which he secured from a dead soldier. While attempting to destroy some enemy machine-gun nests in front of his platoon this gallant officer was mortally wounded by a shell fragment. War Department, General Orders 74 1919

He is buried at Knoxville National Cemetery, Knoxville, Tennessee.

Lieut. Hugh W. Eckel, of the 117th infantry, was killed in action in France, according to information that has been received by his parents, Mr. and Mrs. Hugh Eckel, 2524 Jefferson Avenue. He was a student of the University of Tennessee and entered the officers’ training camp at Fort Oglethorpe, where he was commissioned a second lieutenant and assigned to a Florida regiment in training. Later he was transferred to the 117th infantry. He is survived by five sisters besides his parents.
-The Journal and Tribune, November 2, 1918

Lieut. Hugh W. Eckel, reported dead from wounds, was a member of the 117th regiment. He enlisted in the Third Tennessee, under Col. Cary F. Spence, of Knoxville. Lieut. Eckel was a son of Mr. and Mrs. Hugh Eckel, 2425 Jefferson Avenue. He attended the officers training camp at Fort Oglethorpe, Ga., where he received his commission as a second lieutenant.
-The Journal and Tribune, Knoxville, Tennessee, Sunday, November 10, 1918

Richard H. Dickson and William Hugh Eckel, WWI casualties, were honored by their families with stained glass windows at the former Park City Presbyterian Church at 2204 Linden Avenue. The church now has a different name. It suffered a fire at one time, so I don’t know if the windows are still there.
– John Schlatter