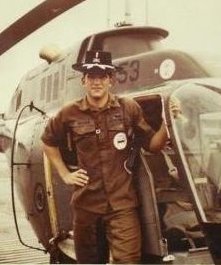 Stephen Mayo Hiscock (Nov. 17, 1950 - Feb. 23, 1971) was the son of Mr. and Mrs. Robert G. Hiscock of Knoxville. Warrant Officer Hiscock attended Tyson Junior High School and played basketball there and also at Bearden High.  He was a 1968 graduate of Bearden High School where he was known as Skipper. He left UT to volunteer for the Army in January 1969 and went to Vietnam in March 1970.

He died as a result of hostile action in an air crash on land in Laos, Thua Thien province. On February 23, 1971, a U.S. Army helicopter OH-58A (tail number 69-16085) from D Troop, 3rd Squadron, 5th Cavalry, 1st Brigade, 5th Infantry Division, call sign Charlie Horse, was on a visual reconnaissance mission on the Laos border in an area nicknamed the "Cabbage Patch" when it took fire from a large enemy force. Pilot CW2, Stephen M. Hiscock, attempted an emergency landing by autorotation, but ran out of RPM. The helicopter crashed and burned with the loss of all personnel on board. The lost crew included pilot Hiscock, crew chief SGT Raymond L. Armentrout, and observer SP4 William T. Walerzak.

He is buried at the United States National Cemetery in Mariette, Georgia.