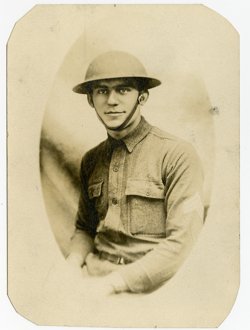 Robert Shearer Brown (Jan. 22, 1897 - Oct. 4, 1918) completed his Junior Year at the University of Tennessee before he was mustered out of Murfreesboro, TN in July 1917. He was trained at Camp Sevier in South Carolina and exited as a 2nd Lt. He was shipped out to France in May 1918 and served under the 109th Regiment of the Army's 28th Infantry Division. He participated in the battles of Chateau-Thierry and Aisne before he was promoted to 1st Lt. in September 1918. Lieutenant Brown and his 113th Machine Gun Battalion was defending the village of Apremont in the Argonne Forest when he was killed in action in October 4th, 1918.

He is buried at Evergreen Cemetery in Murfreesboro in Rutherford County, TN.

"Armistice Day came for LT. Brown on October 14 [4], 1918 in his twenty-first year, as he was killed in action defending with his men of the 113th machine gun battalion the village of Apremont in the Argonne Forest, France. Since that day 19 years ago, the hastily defined cause for which he gave his life, some 3000 miles from his homeland, has been lost in the welter of world turmoil. It is respect to Lt. Brown and the forty-three other young men of Rutherford County who gave their lives in the first World War that we dedicate this space. Together with the hope that never again will men of America be called upon to shed their blood in war, other than in the defense of their liberty upon their native soil." 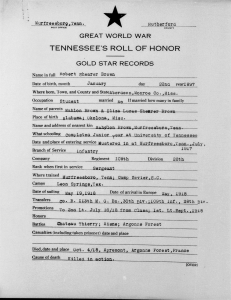 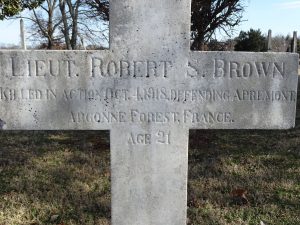