Richard Henry Thurman (Jan. 14, 1954 - May 3, 1977) served as a platoon leader (3rd PLT) in the Ranger Battalion in the UTK Army ROTC Program. As a senior (MSIV) Richard served as the ROTC Brigade S-3, who was the cadet in charge and responsible for the training of all ROTC cadets.

He graduated from the University of Tennessee, Knoxville with distinguished military honors. After graduating from UT he was stationed with the US Army at Fort Benning in Georgia. Richard was shot and killed during training on a firing range at Fort Benning on May 3, 1977. Richard is remembered by one of his classmates as a charismatic leader. He had a ready smile when he was not fully in his role as a ROTC cadet leader. He is buried at Spring City Memorial Gardens in Rhea County, Tennessee. 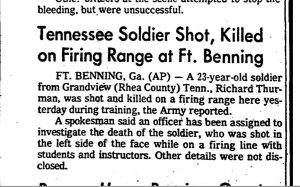 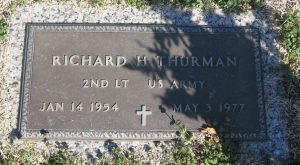