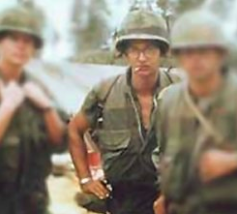 John Richard Ruggles III (Oct. 23, 1944 - Feb. 28, 1968) of Knoxville, TN was the son of John Richard Ruggles Jr. and Gale Fleming Ruggles. He was an alumni of Bearden High School, graduating in 1962 before going to college at Miami University in Ohio. He attended the University of Tennessee Law School from 1966 to 1967 before leaving to enlist in the United States Marine Corps during the Vietnam War.

Ruggles was commissioned as a 2nd Lieutenant after Office Candidate School at Quantico, Virginia at the end of the year in 1967. He was deployed to Vietnam in December of the same year and assigned K Company, 3rd Battalion of the 5th Marines in the 1st Marine Division. 2nd Lieutenant Ruggles and his company was part of Phase I of Operation Houston in Thua Thien Province in February 1968. They were sent to conduct a search and clear mission south of Phu Bai Combat Base on February 26th along the strategic location of Highway I. On February 28th, K Company was operating the vicinity of Nui De Kep mountain when multiple mines wired together were detonated near a group of marines, killing three and wounding four. 2nd Lieutenant Ruggles was one of the three casualties killed in action by multiple fragmentation wounds caused by the explosion.

Ruggles was returned home and buried at Highland Memorial Cemetery in Knoxville, TN. In memory of his service to his nation and his love of baseball as a youth growing up in Knoxville, a little league baseball field at Lakeshore Park in Knoxville was named Ruggles Field in 2001.