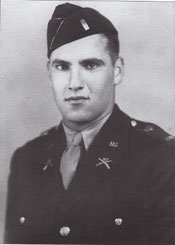 Lieutenant James T. Ailor was born to Thurman and Lena Bell Ailor. He had three siblings: Earl, Eliza Christine, and Lena Kate. Ailor was a Knoxville attorney. He served with the 77th Infantry Division in the Pacific theater. He was part of the unit assaulting Le Shima in the Battle of Okinawa with famed journalist Ernie Pyle at his side. They came under fire and took cover in a nearby ditch when a sniper bullet killed Pyle. Ailor was also killed in the fighting three days later. He was a First Lieutenant.

First Lt. Ailor was initially buried at Ie Shima Cemetery, Ryukyu Retto. He is now buried in the Honolulu Memorial in Honolulu, Hawaii (Plot N, grave 248). His brother Earl served as a captain in the U.S. Army in WWII. He was involved in the Normandy invasion and the Battle of the Bulge.