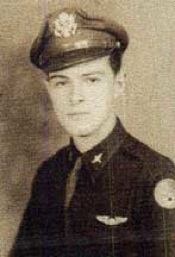 James Granville Allen Jr. (Dec. 9, 1922 - Aug. 15, 1944) was born in Lexington, Virginia and lived in Knoxville, Tennessee. He attended the University of Tennessee for Liberal Arts from 1941 to 1942. HE attended the Virginia Military Institute for one year in the class of 1944 until joining the U.S. Army Air Corps and commissioning as a 1st Lieutenant. 1st Lt. Allen flew in a B-24 Liberator crew with the 718th Bomb Squadron of the 449th Bomb Group serving in the European Theater. He was killed in action when his B-24 crashed at takeoff when it failed to climb altitude and hit high power lines outside of the airdrome in Grottaglie, Italy on August 15th, 1944. 1st Lt. James G. Allen Jr. is buried at the Sicily-Rome American Cemetery in Nettuno, Italy.