James Edward Rhegness (May 20, 1929 – Nov. 4, 1952) was born in Jackson, Tennessee. He graduated from the University of Tennessee as part of the Class of 1951. Rhegness enlisted in the United States Air Force while still a student at UT and set an all-state record on the aviation cadet examinations in 1949. Upon graduation, Cadet Rhegness trained as a pilot with the 3615th Training Squadron at Craig Air Force Base in Alabama during the Korean War. Before being deployed, Cadet Rhegness was killed in an accident during a training exercise when another T-33 training jet collided with his mid-air near Selma, Alabama. James E. Rhegness is buried at Greenwood Cemetery in Knoxville, Tennessee 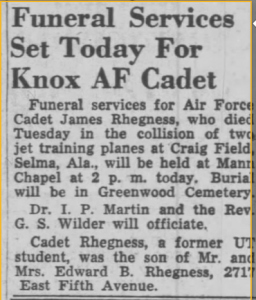 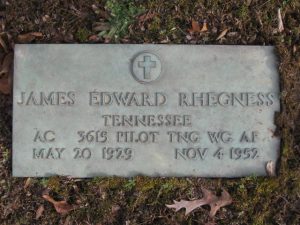