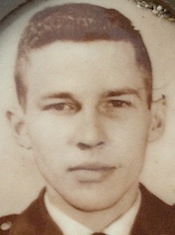 Gary Alven Glandon (April 17, 1940 - May 26, 1966) was from Powell, TN and was among six sons that served in the armed forces. Glandon attended the University of Tennessee and graduated in 1964. While at UT, Glandon was an Air ROTC cadet major. He enlisted in the United States Air Force after graduation

Glandon served in Vietnam as a 1st Lieutenant in the 391st Tactical Fighter Squadron stationed at Da Nang Airbase in South Vietnam. He was a weapons systems officer on a McDonnell Douglass Phantom II Fighter (F-4C) On May, 26th, 1966, 1st Lieutenant Glandon was conducting a series of bombing runs along the coast in South Vietnam when his plane suffered a catastrophic error on its second run. The F-4C exploded in midair before crashing. His remains were unrecoverable. His name is memorialized and inscribed on the Court of the Missing at the Honolulu Memorial in Hawaii. He was posthumously awarded the Distinguished Flying Cross for his heroic service.