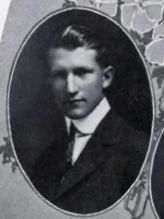 Frank Holmes Atlee (May 20, 1895 – May 9, 1918) was born in Chattanooga, Tennessee. Atlee received his early education at the Culver Military Academy in Indiana before attending the University of Michigan from 1915 to 1916 and then graduating from the University of Chattanooga (now University of Tennessee-Chattanooga) before the United States entering into World War I. He was working as a journalist for a local newspaper in Meridian, Mississippi when he volunteered in the United States Army only four days after the initial proclamation by President Woodrow Wilson.

Atlee was commissioned as a 1st Lieutenant and first assigned to the Mississippi National Guard while in training. He was later moved to the 142nd Machine Gun Battalion of the Army’s 39th Division and put into command as the instructor of D Company while it was being trained in the United States. 1st LT. Atlee was hospitalized in the spring of 1918 for pneumonia at Fort Sill, Oklahoma and died on May 9, 1918 from what was likely that Spanish Influenza. 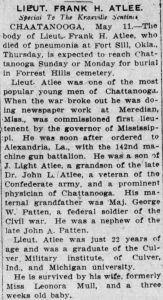 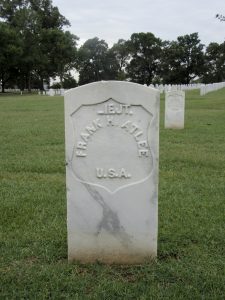