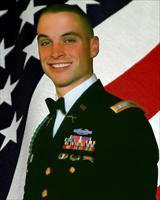 1st Lt. Frank B. Walkup (June 19, 1983 - June 16, 2007) of Woodbury, Tennessee graduated from Riverdale High School in Murfreesboro and then went on to graduate from University of Tennessee at Knoxville, where he met his wife Sabita. He joined the Army in June 2005. Frank died in Kirkuk, Iraq, from injuries sustained in Rashaad Iraq, when an improvised explosive device detonated near his position during dismounted operations at age 23.