Edward John Schultz (Jan. 13, 1936 - March 19, 1962) was a member of the Minnesota Air National Guard from Saint Paul, Minnesota who transferred to the Tennessee Air National Guard at McGhee Tyson in 1960 to fly the F-104. Lt. Schultz had been a university student in Minnesota, but he transferred to the University of Tennessee in 1960. Between the fall of 1960 and November 1961, he became fully qualified in the F-104 at McGhee Tyson and was assigned the rank of 1st Lieutenant. 1st LT. Schultz was mobilized in 1961 as part of the 151st Fighter Interceptor Squadron to be deployed with the unit to Ramstein Air Base, Germany for the Berlin Crisis.

Lt. Schultz was killed on 19 March 1962 in a midair collision with another F-104. He memorialized at Elmhurst Cemetery in Saint Paul, Minnesota. 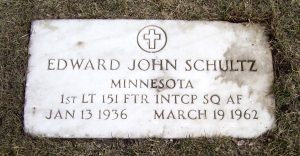