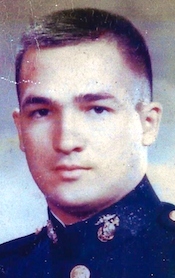 Chester Andrew Molley (June 9, 1945 - April 23, 1969) was the husband of Cheryl J. Molley, the loving father of Mellissa S. Molley, the son of John Molley and Julia Molley of Morristown, TN. His family originally was from Lynch in Harlan County, Kentucky where he was a graduate of Lynch High School. He graduated from the University of Tennessee in 1968 with a degree in Journalism. He enlisted in the US Marine Corps on June 14, 1968 and received a his commission as a Second Lieutenant after completing OSC in Quantico VA. He arrived in Vietnam on December 21 where he was assigned for duty as a Platoon Commander with Company E, 2d Battalion, 9th Marines, 3d MARDIV (Rein) FMF.

During April, the primary mission for the Battalion was the elimination of the enemy threat to Route 9 in the Dong Kio, Dong Ma, and Dong Ha mountain complex in Quang Tri Province. On April 23, Company E was searching for the enemy in Cam Lo District north of Highway 1 near Dong Kio when it encountered booby traps and was hit with a barrage of mortar fire before making contact with the enemy. Three men were killed and eleven were wounded during the engagement before the Marines continued on their mission. Several hours later the Marines engaged the enemy in a series of bunkers and when the fire fight was over seven Marines had been killed in action and several were wounded. Molley was one of the casualties, he was killed in action by fragmentation wounds from a hostile explosive device.

2nd Lieutenant Chester Molley is buried at Hamblen Memory Gardens, Morristown, TN and is remembered by the University of Tennessee with the Chester A. Molley Memorial Scholarship.