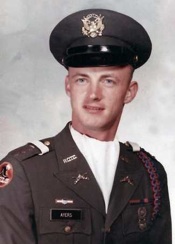 Charles Haskell Ayres (May 12, 1945 – Jan. 22, 1969) was from Midway, TN. Ayres attended the University of Tennessee from 1963 to 1967. Ayres was enlisted in the United States Army in 1968 and served with Troop A, 3rd Squadron, 4th Cavalry Regiment, of the 25th Infantry Division. Ayres was promoted to 1st Lieutenant and served as platoon leader of Troop A when they were deployed to Vietnam in November 1968.

In January 1969, the 4th Cavalry was operating in Boi Loi Woods in the Hậu Nghĩa province. Boi Loi served as staging area for the North Vietnamese and the 4th Cavalry was sent to dislodge them from the district. On January 17th, they came under enemy fire that included heavy RPG attacks from concealed bunkers. When one of their vehicles was disabled by enemy RPGs, Lieutenant Ayres left his command vehicle to help evacuate the wounded. He was wounded by enemy small arms fire in the process and evacuated to the hospital at Cu Chi Base Camp. He later succumbed to his wound a few days later on January 22nd.

Charles Ayres was awarded posthumously the Silver Star, the nation’s third highest combat honor, for his valorous actions in the combat operation at Boi Loi Woods. He as returned home to his family and is buried at Warrensburg United Methodist Church Cemetery in Midway, TN.