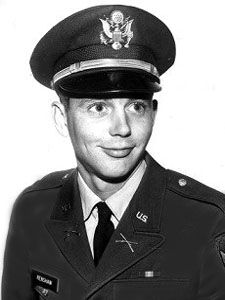 Anderson Neely "Skip" Renshaw (Dec. 2, 1943 - April 13, 1969) was husband to Sarillia W. Renshaw and the son of Mr. and Mrs. Anderson M. Renshaw Jr. First Lt. Renshaw was a native of Knoxville, TN and had attended the University of Tennessee while studying Political Science.

Renshaw enlisted in the Army after he graduated in the spring of 1967. He was commissioned as a 1st Lieutenant after training at Fort Benning, GA. His tour in Vietnam began on November 24, 1968 as a combat platoon leader of C Company in the 1st Battalion, 8th Cavalry of the 1st Cavalry Division. Lieutenant Renshaw was killed in combat in Tay Ninh Province, South Vietnam on April 13, 1969. He was returned home and is buried at Highland Memorial Cemetery in Knoxville, TN.