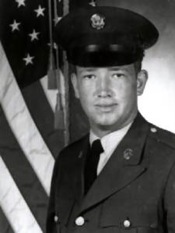 Albert Ray Hankins (Sept. 2, 1949 - May 8, 1971) was born in Powell, TN. He was a graduate of Powell High School and attended the University of Tennessee from 1968 to 1970 years before entering the army through the Selective Service.

Hankins served as a Private First Class in the 16th Aviation Group, 14th Battalion of the 23rd Americal Division. He was stationed at an airbase in Quang Tin Province of South Vietnam in 1971 providing direct aviation assault capabilities to ground forces. PFC Hankins was killed in the line of duty from a non-combat accident when he was struck by debris from an excavator working on the air strip.

He received the Bronze Star posthumously. The citation read in part, “… by direction of the President, The Bronze Star Medal is presented posthumously to Private First Class Albert R. Hankins for distinguishing himself by outstanding, meritorious service in connection with ground operations against a hostile force in the Republic of Vietnam during the period, 25 January 1971 to 8 May 1971.”