The 2022 International Women in Aviation Conference will be inducting Captain Rosemary Mariner into the Women in Aviation’s Pioneer Hall of Fame. The conference will be held at the Gaylord Opryland Resort & Convention Center in Nashville, Tennessee, March 17-19, 2022. Cpt. Mariner’s induction ceremony and celebration dinner will be on Saturday, March 19, from 6:00pm to 8:00pm. 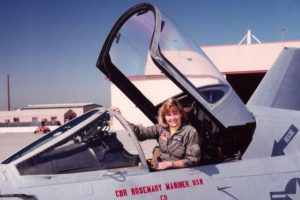 Capt. Rosemary Bryant Mariner was the first woman admitted to the Purdue University Professional Pilot program, and after graduation was selected in the first group of eight women to train as naval aviators in 1973. Rosemary received her Navy wings of gold in June 1974, and became the first military woman to qualify in a tactical jet aircraft, the A-4 Skyhawk, in 1975. The following year, she broke another barrier, becoming the first female naval aviator to fly the A-7E Corsair II. Rosemary continued to add many “firsts” to her accomplishments including the first Navy woman to fly the vintage F-86, the first woman aviator to qualify as a Surface Warfare Officer, and the first military woman to command an operational aviation squadron. She flew over 3,500 flight hours and 17 carrier landings and was awarded the Defense Superior Service Medal among many other awards in her Naval career of 24 years of service. After retirement, Cpt. Mariner taught military history at the University of Tennessee and served as a staff member for the Center for the Study of War and Society. She also continued to serve as an advisor on national defense policy and was an advocate for further integration of women into the military. Cpt. Mariner passed away at age 65 and was honored by the Navy with a four F/A-18F aircraft flyover at her funeral in East Tennessee.

For more information on 2022 WAI Conference, go to https://www.wai.org/22conference