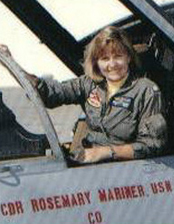 Captain Rosemary Bryant Mariner was a Resident Scholar with the Center for the Study of War and Society and Lecturer in History Department at the University of Tennessee Knoxville. A retired naval aviator and former squadron commander, Captain Mariner’s last military assignment was as the Chairman of the Joint Chiefs of Staff  Professor of Military Studies at the National War College.  A graduate of Purdue University, she held an MS in National Security Strategy from the National War College.  Her research at the Center for the Study of War and Society focused on evolving U.S. military tradition, with additional study in ancient Greco-Roman and English political philosophy and history.  Her specific areas of study included the connection between republican citizenship and military service; citizen armies; conscription;  just war theory; and the nexus between homeland security and civil-military relations.  Additionally while working at the CSWS, she was a committed expert on gender integration in the armed forces and advised public policy institutions on military personnel matters.  Her extensive media experience included working as a military consultant for ABC News and commentator on NPR.  Along with G. Kurt Piehler, she was the co-editor of the publication The Atomic Bomb and American Society: New Perspectives (University of Tennessee Press, 2009).

From the Desk of the Director

An Inside Look at the Center