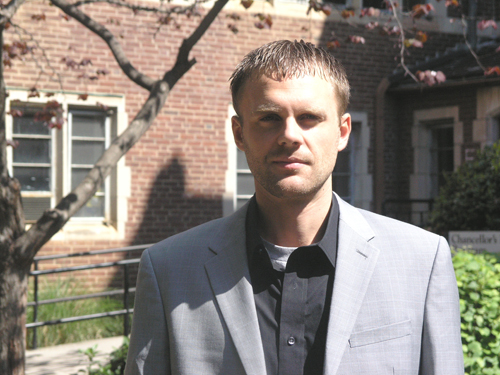 Prof. Jordan Kuck, assistant professor of history at West Virginia Wesleyan College, a former graduate assistant at UTK’s Center for the Study of War and Society, and a graduate of UTK’s doctoral program in Modern European history, has been honored in a highly international way! Prof. Kuck was invited to contribute a chapter to the official three volume history of Latvian foreign policy. The publication is funded by the Latvian government and led by the Latvian Institute of International Affairs: each year between 2016 and 2018 a new volume will be released as part of the celebration of Latvia’s centennial. Volume I covers the interwar years, and his chapter deals with Ulmanis (the president and later dictator of Latvia) and his pro-American policies. Prof. Kuck’s chapter is: “‘Made in America’: Kārlis Ulmanis un proamerikānisma izveide Latvijā, 1918-1940” in Latvijas ārlietu simtgade: 1. sejums: idejas un personības (Rīga: Latvian Institute of International Affairs, 2016).

We quote here from the opening section of that article:
“It is not surprising, given Ulmanis’s towering presence in Latvian history, that historians have devoted much attention to his policies. With regard to his foreign policy, in the past critics of Ulmanis have widely condemned him for perceived failures (including some bad business deals and investments), most noticeably for not somehow doing enough to protect Latvia’s independence amid the tumultuous geopolitical landscape of the 1930s. This chapter, taking a less traditional approach, offers a new and much-needed look at Ulmanis’s foreign policy. It argues that we should in fact give Ulmanis credit for recogfnizing early on the power of America – especially cultural “soft power” – even as the Americans themselves were still uncomfortable in projecting it. By this I mean that Ulmanis did not promote pro-Americanism in Latvia because he believed that the United States would militarily protect Latvia. This is obvious given the fact that there was no concerted effort to establish some sort of defensive pact. Rather, Ulmanis viewed a pro-American foreign policy through a cultural lens, believing that any hope of a future military pact rested on the ability of Latvians to prove their self-worth and to cultivate cultural ties that might blossom someday into a full-fledged partnership. In short, since Ulmanis himself had traveled and lived in countries like Germany, Switzerland, and the United States, he understood very well that Latvians needed to combat any negative stereotypes and show the Western powers that they, too, were a modern, progressive nation worth working with and protecting.

Ulmanis thus pursued cultural ties with the United States because he believed that the American socio-economic model was the most progressive. This made Ulmanis a remarkably unique European prime minister. In that age, most Europeans and European leaders looked to Germany and Italy, the Soviet Union, or perhaps to Great Britain, depending on one’s ideological and political preferences. Yet Ulmanis clearly believed that America was the model to emulate, that America was the future superpower with which Latvia needed to cultivate ties. True, it is undeniable that Ulmanis also borrowed much from the new “third way” model of transnational fascism developed in Italy and Germany, but he did so in a fascinating, though certainly controversial, way that sought to meld his penchant for America and American culture with what was politically astute and in vogue in Europe.

In the end, though, when Latvia was faced with threats from the east, American leaders failed to come to the aid of Ulmanis and Latvians. To some extent this was true during the Latvian War of Independence and absolutely that was the case in 1939-40. However, that does not mean that Ulmanis’s pro-American foreign policy was a failure. On the contrary, it was a smashing success. By promoting American cultural institutions like 4-H (Mazpulki) and state fairs (Pļaujas svētki), Ulmanis was able to help the American leaders “discover” the cultural affinities between Latvians and Americans. Had the Second World War not come so soon, and had Ulmanis had more time to facilitate American-Latvian relations, those military guarantees of protection would have likely developed. As proof, one need not look any further than Article 5 of the NATO defensive alliance.

This cultural component of Ulmanis’s foreign policy is not as well known, or perhaps even primarily unknown, and hence the main objective of this chapter is to flesh out more fully the hallmarks of and advantages gleaned from Ulmanis’s pro-American foreign policy…..”