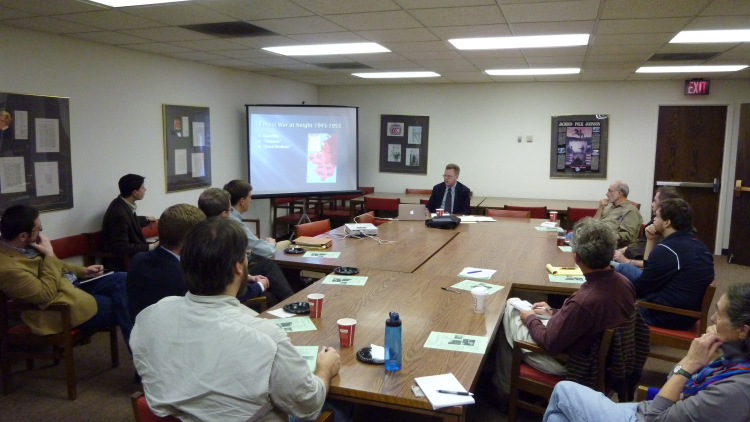 f the Center’s contribution to the humanities initiative and the wider academic community on campus, the Center hosts the AfterWars research seminar and workshop. This unique workshop, which is funded by the UT Humanities Center, regularly brings together scholars, including professors, lecturers, and graduate students, from throughout the humanities to discuss topics related to how the aftermath of war has been shaped at different times and in different places in the distant and more recent past. Here is a list of previous AfterWars events:

April 5: Eric Muirhead, UT History Dept., “The Black Baron at Villers-Bocage: Michael Wittmann and the Characteristics of the Offense.”

May 3: Professor Eric Roubinek, University of Carolina, Asheville, “From a Nazi Imperialism to a Fascist Imperialism: Constructing a Transnational Nationalism in the Colonial Press of Nazi Germany and Fascist Italy.”

October 16: Dr. Jeremy Popkin, University of Kentucky, “The Impact of War on the French Revolution.”

January 31: Josh Jeffery, Doctoral Student in U.S. History, “Losing My Religion: The Effect of World War I on the Theology of the Stone-Campbell Movement.”

April 18: Book Discussion of Junger’s Tribe: On Homecoming and Belonging with Eliza Echeverry.

January 14: Dr. Thomas Lecaque, Lecturer, Department of History, “Marching to Apocalypse: The Provencal First Crusade, the Cult of the Holy Lance, and Apocalyptic Anxiety during the Siege of Jerusalem in 1099.”

March 30: Carol Lilly, Professor of History and Director of International Studies, University of Nebraska Kearney, “What Did They Die For?: Grave Markers from the Wars of Yugoslav Dissolution in Serbia, Croatia, Bosnia-Hercegovina, 1991-1995.”

January 23: Dr. Wayne E. Lee of the University of North Carolina at Chapel Hill gave a talk entitled “Speaking through Skulls: Death and Its Meanings for Eighteenth-Century Soldiers.” Prior to the talk Dr. Lee also led a discussion of his recent historiographical essay, “Mind and Matter—Cultural Analysis in American Military History: A Look at the State of the Field.”

March 14: The workshop participants discussed Dr. Margaret Andersen’s (of the UT History Department) work in progress. Prior to the discussion, Dr. Douja Mamelouk, a Professor of French and Arabic in UT Modern Foreign Languages, offered her commentary on Dr. Andersen’s essay, “The Office de la Famille Française: Familialism and the National Revolution in 1940s Morocco.”

January 24: Dr. Liulevicius, the Lindsey Young Professor of History in the UT Department of History and the Director of CSWS, gave a presentation of a work in project. The talk was entitled “Post-1945 Guerilla Warfare in Eastern Europe: The Baltic Forest War, 1945-1965.”

February 17: Dr. Karen Petrone of the University of Kentucky gave a talk entitled, “Spirituality, the Supernatural, and Soviet Memory of World War I.”

November 12: Dr. Paul Cooker, a lecturer in the UT History Department, presented portion of his manuscript. The talk was entitled “‘We Were Somebody, To Be Sure’: The Shifting Legacies of Tennessee’s Black Civil War Veterans.”

February 8: Geoff Krempa, a PhD student in modern European history in the UT History Department, presented a talk based on his dissertation project on transnational radical nationalism in interwar Central Europe.

February 22: Dr. Joseph Kosek of George Washington University spoke about American traditions of nonviolence and the development of those traditions in World War II.

September 14: Will Rall, a PhD student in modern European history in the UT History Department, gave a talk entitled “Confronting Gleichschaltung: Catholic Charity and Everyday Practice in the Third Reich.

February 25: Dr. Jerry Lembcke of Holy Cross College gave a talk based upon his book, The Splitting Image: Myth, Memory, and the Legacy of Vietnam. Dr. Lembcke also led an earlier workshop discussion of his new book, Hanoi Jane: War, Sex, and Fantasies of Betrayal.

April 1: Dr. Margaret Andersen, an Assistant Professor in the UT History Department, gave a presentation entitled “Depopulation on Either Side of the Mediterranean: French Protnatalists and the Ligue des Familles Nombreuses Françaises de l’Afrique du Nord.”

April 16: Paul Cooker, a PhD student in American history in the UT History Department, offered his comments on “The First World War and Its Aftermath, 1914-1933,” which is a chapter from Dr. Liulevicius’s book manuscript. The workshop then moved to a wider discussion of comparative cases in modern America, modern and medieval Europe, and Africa.

April 30: Brian Vick of Emory University gave a talk entitled “The Vienna Congress of 1814-1815, Europe, and the Aftermath of War.” Earlier in the day Dr. Vick also led a discussion of an article on the social role of the memories of the wars against Napoleon in Germany.

May 7: The workshop participants discussed Wolfgang Schivelbusch’s book, The Culture of Defeat: On National Trauma, Mourning, and Recovery.

December 8: Mike McConnel, a PhD student in modern European history in the UT History Department, gave a presentation of a work in progress. The group then discussed a draft of an article that Mike subsequently submitted for publication. In the work, Mike looks at the ways in which Nazi Gestapo security forces used security strategies invented in occupied Eastern Europe within Germany itself.